What can you do to prevent your contracts from getting too large?

Why is there a limit?

On November 22, 2016 the Spurious Dragon hard-fork introduced EIP-170 which added a smart contract size limit of 24.576 kb. For you as a Solidity developer this means when you add more and more functionality to your contract, at some point you will reach the limit and when deploying ill see the error:

Warning: Contract code size exceeds 24576 bytes (a limit introduced in Spurious Dragon). This contract may not be deployable on mainnet. Consider enabling the optimizer (with a low "runs" value!), turning off revert strings, or using libraries.

This limit was introduced to prevent  denial-of-service (DOS) attacks. Any call to a contract is relatively cheap gas-wise. However, the impact of a contract call for Ethereum nodes increases disproportionately depending on the called contract code's size (reading the code from disk, pre-processing the code, adding data to the Merkle proof).  Whenever you have such a situation where the attacker requires few resources to cause a lot of work for others, you get the potential for DOS attacks.

Taking on the fight

Unfortunately, there is no easy way of getting the bytecode size of your contracts. A great tool to help you that is the truffle-contract-size plugin if you're using Truffle.

This will help you figure out how your changes are affecting the total contract sizes.

In the following we will look at some methods ordered by their potential impact. Think about it in the terms of weight-loss. The best strategy for someone to hit their target weight (in our case 24kb) is to focus on the big impact methods first. In most cases just fixing your diet will get you there, but sometimes you need a little bit more. Then you might add some exercise (medium impact) or even supplements (small impact). 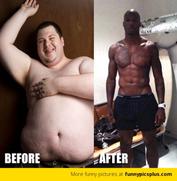 Focus on this (big impact):

This should always be your first approach. How can you separate the contract into multiple smaller ones? It generally forces you to come up with a good architecture for your contracts. Smaller contracts are always preferred from a code readability perspective. For splitting contracts, ask yourself:

One simple way to move functionality code away from the storage is using a library. Don't declare the library functions as internal as those will be added to the contract directly during compilation. But if you use public functions, then those will be in fact in a separate library contract. Consider using for to make the use of libraries more convenient.

A more advanced strategy would be proxy system. Libraries use DELEGATECALL in the back which simply executes another contract's function with the state of the calling contract. Check out this blog post to learn more about proxy systems. They give you more functionality, e.g., they enable upgradability, but they also add a lot of complexity. I wouldn't add those only to reduce contract sizes unless it's your only option for whatever reason.

Then check those adjustments (medium impact):

This one should be obvious. Functions increase a contract size quite a bit.

makes a difference of 0.28kb. Chances are you can find many similar situations in your contracts and those can really add up to significant amounts.

Consider a low run value in the optimizer

You can also change the optimizer settings. The default value of 200 means that it's trying to optimize the bytecode as if a function is called 200 times. If you change it to 1, you basically tell the optimizer to optimize for the case of running each function only once. An optimized function for running only one time means it is optimized for the deployment itself. Be aware that this increases the gas costs for running the functions, so you may not want to do it.

If you are using the ABIEncoderV2, it can help to not pass structs to a function. Instead of passing the parameter as a struct...

... pass the required parameters directly. In this example we saved another 0.1kb.

Modifiers, especially when used intensely, could have a significant impact on the contract size. Consider removing them and instead use functions.

Those tips should help you to significantly reduce the contract size. Once again, I cannot stress enough, always focus on splitting contracts if possible for the biggest impact.

The future for the contract size limits

There is an open proposol to remove the contract size limit. The idea is basically to make contract calls more expensive for large contracts. It wouldn't be too difficult to implement, has a simple backwards compatibility (put all previously deployed contracts in the cheapest category), but not everyone is convinced.

Only time will tell if those limits will change in the future, the reactions (see image on the right) definitely show a clear requirement for us developers. Unfortunately, it is not something you can expect any time soon.

Do you have more methods for reducing the size? What are the best ways in your experience? Let me know in the comments if you know of something.

Do you have more methods for reducing the size? What are the best ways in your experience? Let me know in the comments if you know of something.